West Virginians overwhelmingly applauded Sen.Joe Manchin’s decision to oppose the Build Back Better Act. They believe that nothing in the bill is going to benefit them and praised Senator Manchin for being true to his constituents.

“I thank him for placing the welfare of the country and the spirit of the people before politics,” said a young woman from West Virginia.

“I think it was the right thing to do” one woman told the reporters.

Even though most polls in West Virginia support and praise the senator, critics say that the purported support for Build Back Better Act in West Virginia is more likely to be overstated among the electorate as polling is sparse there and generally it is done by supportive organizations.

The Build Back Better Act is a bill introduced in the 117 th Congress to consummate aspects of President Joe Biden’s Build Back Better Plan. The democratic plan was aimed to revolutionize climate change and the social welfare sector. They believed that this was a historic and transformative act for the Americans.

The Build Back Better Plan is the recent pressure point in US politics. There are many opinions and breakpoints regarding this bill. Democrats believe that the bill will certainly reduce the cost of living and support low-income families. They pointed out that it is going to reduce inflation. 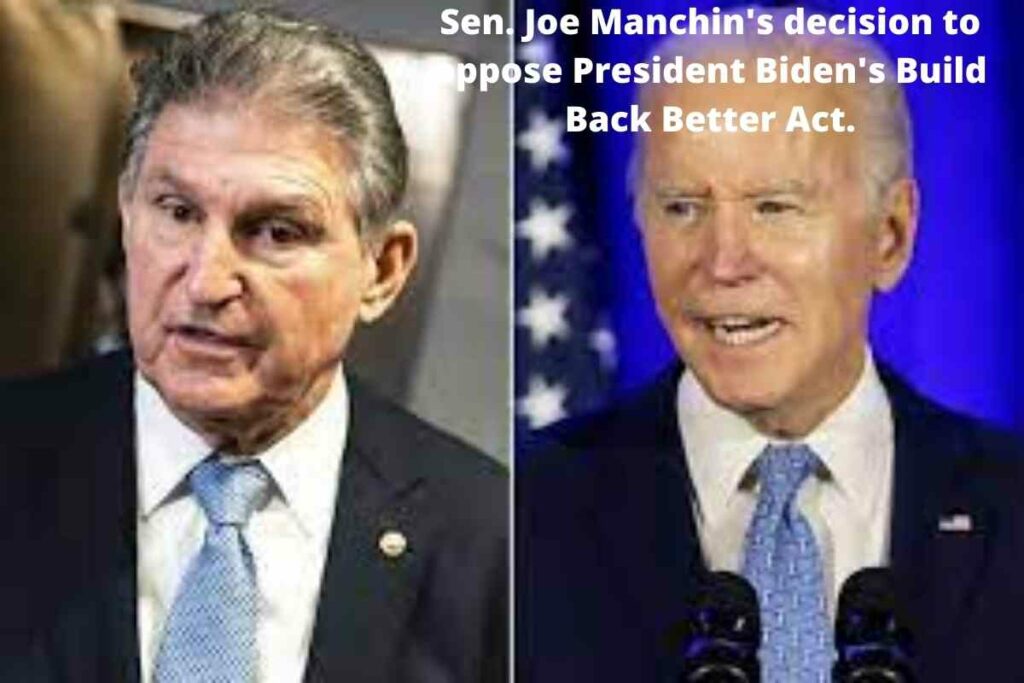 But many people who oppose the bill, including the Republicans, believe that injecting more federal money into the economy will cause disaster. They argue that this will shoot up the inflation and this will add more problems to the already exorbitant prices after covid.

The dissent on the Build Back Better Plan escalated and gained a new perspective on December 19th when Senator Joe Manchin, a Democrat from West Virginia and the crucial holdout vote, announced on television that, “I cannot vote to continue with this piece of legislation… I’ve tried everything humanly possible; I can’t get there.”

He added, “This is a no on this legislation. I have tried everything I know to do. And the President has worked diligently. He’s been wonderful to work with. He knows I’ve had concerns and the problems I’ve had and, you know, the thing that we should all be directing our attention towards the variant, a Covid that we have come back at us in so many different aspects in different ways, it’s affecting our lives again.”

“I have always said, ‘If I can’t go back home and explain it, I can’t vote for it.’ Despite my best efforts, I cannot explain the sweeping Build Back Better Act in West Virginia and I cannot vote to move forward on this mammoth piece of legislation.

He added that there was no transparency on the true cost of the Build Back Better Act. The non-partisan Congressional Budget Office determined the cost is upwards of $4.5 trillion which is more than double what the bill’s ardent supporters have claimed. The lack of clarity on the funding is not what the American people deserve.

Mr. Manchin said that he is concerned about the implications of the proposed action.“If enacted, the bill will also risk the reliability of our electric grid and increase our dependence on foreign supply chains”.

Several Democratic lawmakers were outspoken over Manchin’s decision. On Monday, Rep. Alexandria Ocasio-Cortez, of New York, called Manchin’s move “an “egregious breach of the trust of the president” and said that Democrats have “every right to be furious with Joe Manchin.”

The white house also swung with its sharp charges about Manchin. In a statement last day, white house spokeswoman Jen Psaki called Manchin’s comments a sudden and inexplicable reversal in his position and a breach of commitments to the president and senators’ colleagues.

People who support the act said that West Virginian people naturally tend towards the conservative views on typical culture war issues like employment, guns, abortions, and race. Also, the political attitude of people in West Virginia is such that they typically are in favor of government programs that benefit them. Winning elections in West Virginia historically entails candidates pledging to bring home benefits to their people. Democrats say that more than the historic impacts of the legislation, what SanJoe Manchin cared about was electoral politics.

Whether this is a clangor for the president’s legislative agenda or just a serious setback is still to be litigated. But it truly made Christmas hard for Mr. Biden.

Events of the last few days have done more damage to Biden’s reputation as well as a heavy blow for the democrats. His in-country decisions as well as his foreign policies were overly criticized by the media and public since his presidentship.

The Afghanistan-withdrawal debacle, the spurting up inflation, and the resurgent coronavirus pandemic have all taken their toll on an administration that has lost its verve. A catchy key phrase of Mr. Biden’s campaign for the presidency was that he was trying to return Congress to normalcy and to restore “the soul of America”. Nearly one year into his administration, Americans don’t believe that Biden is on the right path to fulfill his promise. Losing a democrat vote in a crucial bill is the latest manifestation of this.